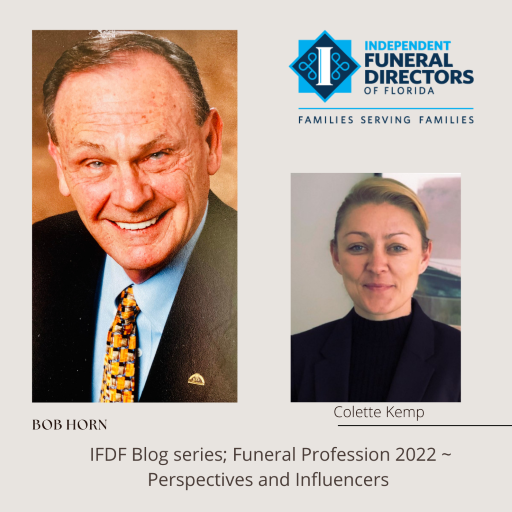 The Independent Funeral Directors of Florida's mission is to promote, enhance and perpetuate independently owned and operated funeral homes, crematory, and cemetery firms in the state of Florida.

Each month for our blog, Colette Kemp, IFDF Communications Committee Co-Chair, interviews people from our profession's best of the best.

Bob, thank you for agreeing to do this interview. Could you tell us a little about yourself and how you got started in the funeral profession?

I started with a small family-owned funeral home in1962.  An early pioneer of the funeral home consolidation movement, Paul Hamilton, purchased our firm and convinced me to join him as a VP and Organizer of International Funeral Services (AKA IFS Industries, Des Moines/San Diego) in 1966.  Following the IFS-SCI merger in 1981, I joined Tom Johnson at Pierce Brothers (Los Angeles/Stuart, FL) as EXEC VP.  In 1991 we co-founded Prime Succession (Batesville, IN), serving as Senior VP + COO.  I co-founded Keystone Group Holdings (AKA Keystone North America, Tampa) in 1996 and served as CEO, President, + Chairman until my retirement in late 2006.  My four consolidation companies represent the acquisition and operation of over 500 funeral homes, cemeteries, and related businesses.  I have been blessed!

You are the first to receive the Funeral Service Foundation (FSF) Distinguished Service Award.  You received this prestigious award while at the 2021 NFDA annual conference.  What was that experience like?

It was totally unexpected!  I’m so proud/pleased that the FSF has become NFDA’s charitable arm.  NFDA CEO Christine Pepper during the late 1990s had the vision and courage to rescue the original foundation based in Evanston, IL, and to bring it in under the NFDA umbrella.  Mark Busch (Busch FHs, Cleveland), Chris Barott (Aurora Casket), and others re-organized and sought funding for what today is the FSF.  I served two years as Chair and eight years as a Trustee.  Today the FSF has nearly $12 million in a permanently endowed trust.  In addition to various charities dealing with children, FSF supports numerous mortuary school scholarships, “Women in Funeral Service” conference, “Meet the Mentors,” ‘Talk of a LifeTime”, and in conjunction with ICCFA Educational Foundation, hire the veteran “Journey to Serve” program and many others; all funded with earnings from the Trust!

While we know you are retired, you are still actively involved in the industry in advisory roles.  Would you care to share any information on that with us?

Since my term as a FSF Trustee expired, I have tried to stay connected, primarily in a fundraising role.  Currently, I’m working with FSF Ex Dir Lee Wiensch to establish a “Planned Giving” program whereby FDs can remember the FSF as part of their estate planning.  I find this to be a great way to give back to a profession that has treated us and our families so well.  I’m still involved with the Johnson Consulting Group and broker 2 or 3 buy-sell transactions each year.  I remain on the Advisory Boards of Veterans Funeral Care (Clearwater), Concord Family Funeral Homes (Chicago), and a half dozen private, independent funeral homes.

What changes have you seen in the industry over the years, and what do you think will change in the future?

I’ve had a good seat to witness the changes during past and now present times.

What advice would you give to a young person starting a career in this field?

Befriend hospice, befriend veterans, and utilize the celebrant program; you will add value to your firm when accomplished.  Never hurts to be sincere and empathic.

If you had to do things over again, is there anything you do differently?

Nothing overly significant; perhaps quit smoking at an earlier age!

Legacy is a common term we hear when funeral home owners start planning their retirement; what do you want your legacy to be?

Dr. Seuss said it: “Don’t cry because it’s over; smile because it happened.”

Bob, thank you so much for answering these questions; if our readers would like to connect with you, is LinkedIn a good place to find you?

Yes, or the email address below.  Thanks for the questions!!!

If you’d like to connect with Bob Horn, you can do so by clicking on the links below: